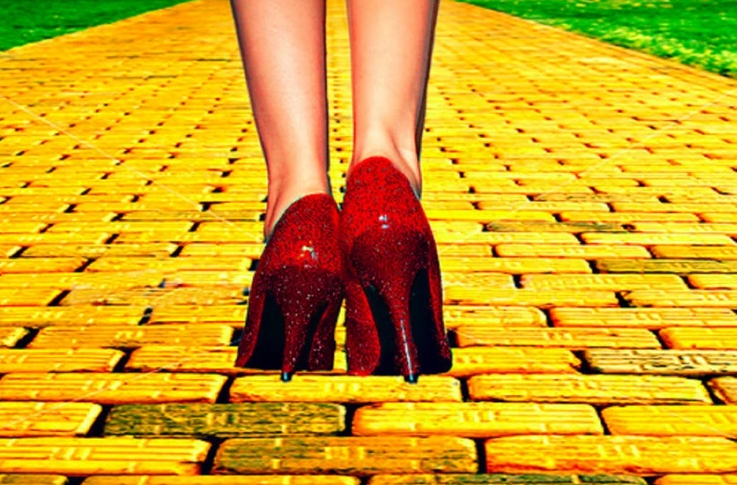 Who remembers the classic movie The Wizard of Oz? The story of four unlikely characters that crossed paths. A Tin Man, a Scarecrow, a Lion and a young girl called Dorothy. It’s one of those movies that once seen, I think it is impossible to forget. And the wisdom and richness it contains is invaluable.

What I had forgotten though, was how each character came to be who they were.

How did the Tin Man become tin? He started life as a woodsman.

How did the Scarecrow come to want a brain when he started out scaring crows from corn fields?

And how did the ‘King of the Beasts’ Lion end up being so cowardly?

Most of us will remember Dorothy’s story. After getting caught up in a tornado she finds herself in a far-away land called Oz filled with talking creatures and little people and now all she wants to do is find her way back home. She embarks on a journey along the yellow brick road and encounters the all too familiar battle between ‘good’ and ‘evil’ – the good witch and the wicked witch. She learns the value of ‘perception vs belief’ and her path crosses with three new friends, each one on their own journey and all with their own issues.

How similar is this to real life?

They decide to group together and seek out the all-powerful Wizard of Oz. In their minds he has the magic answer and he will be able to give them each what they truly desire.

This is a beautiful story of four strangers who become friends because of a common goal, they all want to change something. It is a story of four issues that face the average person in everyday life and it brings them together for a ‘reason’ and a ‘season’. Each one has their own baggage and their own desire, but with the support and encouragement of each other, they all become better versions of themselves and achieve a sense of fulfilment and purpose that didn’t know they could.

There is no coincidence their paths cross and they embark on an adventure, learning about themselves, each other and life along the way. They discover the power of love and friendship, courage and persistence and they learn that at the end of the day, we already have within us what it takes to be happy.

Sometimes it just takes someone else’s encouragement and belief in us, to help us find it.

It is implied that the Land of Oz is Dorothy’s dream and the story ends with her waking up in bed. Dorothy believes otherwise, that her dream was not a dream, but was in fact real. The question remains when she wakes up and is reunited with her Aunt, Uncle, their three farm workers, and her teacher who bare a striking resemblance to the Scarecrow, the Tin Man, the Lion and Professor Marvel – The Wizard’s alter ego.

If I can take this one step further and consider the all too thin veil that separates between life and death and how little we know about reincarnation, other lives, realms and dimensions, then perhaps we can entertain that Dorothy’s belief of Oz, or maybe a less fantastic version, could in fact be real.

After doing some digging, I learned that the character Dorothy was first created by an American author L Frank Baum. Dorothy first appears in his novel in 1900 and then becomes the main character in the 1939 film we know as – The Wizard of Oz.

What I didn’t know, was that there was speculation that Dorothy’s character was probably named after Baum’s own niece who died in infancy. The story goes that Baum’s wife was so deeply devastated by her niece’s death, he decided to insert her name into his stories as a memorial. Elements of ‘Dorothy’s’ personality is similar to those of his niece’s grandmother.

Isn’t it amazing how when we take a step back, and look at how things have come to be and why we are the way we are, that it often doesn’t take much digging to uncover a back story and explanation?

So, I invite you to join me over the next few weeks as we explore these wonderful characters and see what, if anything, they have to teach us.

Ps. If you’re wondering what this all has to do with my son Ben who is the inspiration behind my posts then let me tell you. The personal journeys many of us are currently on and what we will explore with our new Oz friends in the next few weeks will reveal secrets of Love, Compassion, Loyalty and Courage, Persistence and Belief and above all, an incredible Legacy. And all these have EVERYTHING to do with Ben! 😊