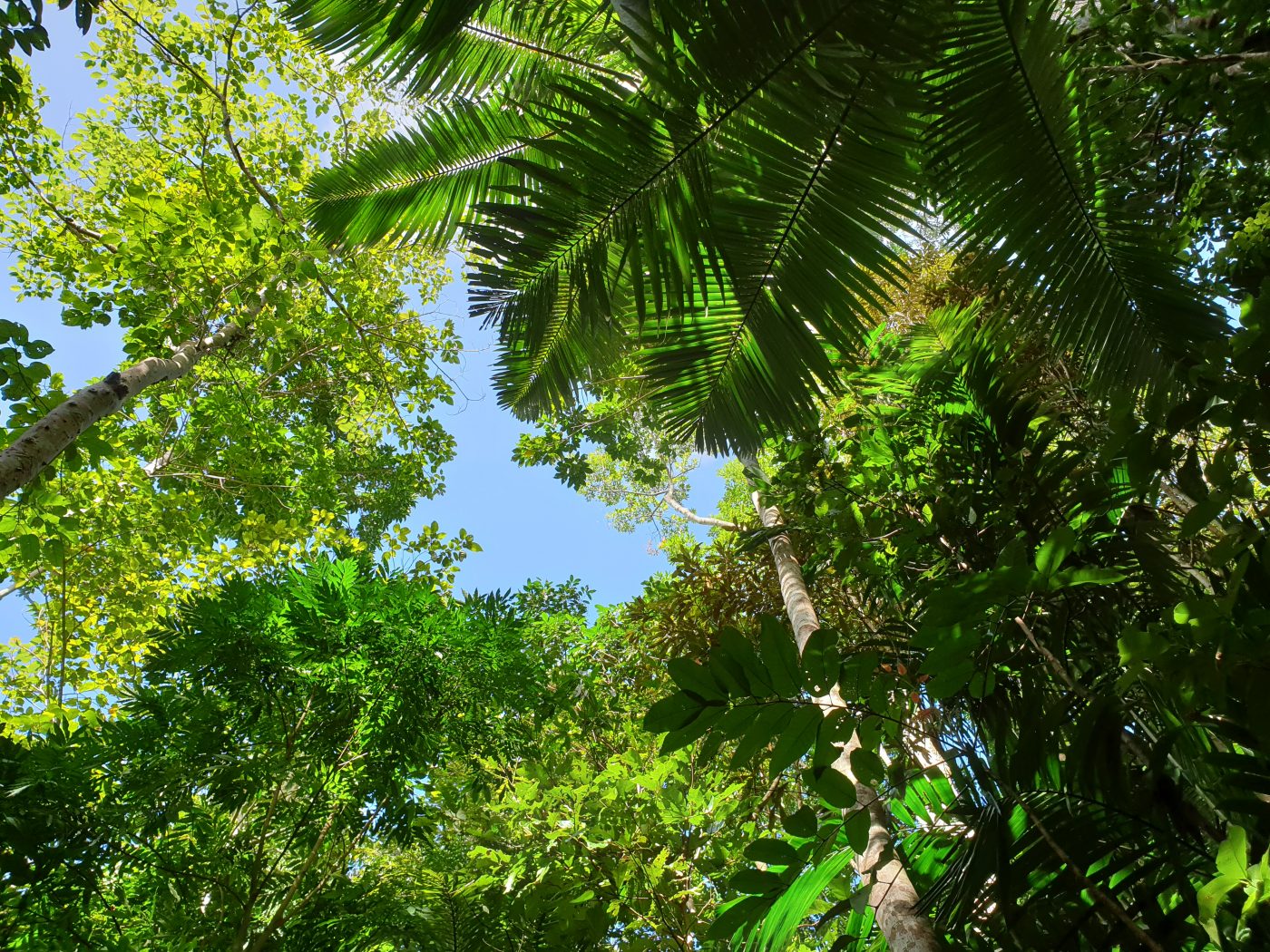 My yoga teacher held out a black notebook. I noticed there were several hand-written comments, and it was open to a page she had titled:

‘Why Would I Go To a Yoga Retreat?’

“Write down a line or two about why you would go on a yoga retreat and pass it on” she said. “A line or two??” I choked, instantly trying to condense the magnificent list of initial thoughts I had just had, into a single sentence.

Perhaps seeing the look on my face and knowing what I do for a living, she quickly followed up with a laugh, ‘Oh you can write as much as you like.’

It was the final evening of a yoga retreat. I had left my home in suburbia five days earlier. I had traveled two and a half hours by plane and two hours on a bus to spend the next week waking up to the sound of the birds in a rainforest. Each night I fell asleep to the croaking of large green tree frogs and the chatter of other night creatures.

The first thing I saw when I opened my eyes each morning was the huge trees that soared into the sky only a meter from the flyscreen walls of my rainforest hut.

Yoga is the ultimate food for the mind, body and soul

I thought about the previous few days. I smiled and at the same time, blinked tears away. Yoga has often had a habit of making me emotional.

I looked down the long dining table. We were a group of 16 from all walks of life and ranging in age and experience. We were led by an incredible teacher who herself was in her early 70’s but could easily be mistaken for being 20 years younger.

The youngest in the group was a girl in her early 20’s and the oldest, a 79-year-old man there with his wife. She was also in her 70’s. With over 150 years of life experience between the two of them, this couple was nothing short of inspirational.

You are never too old to try something new

Tony had decided to take up yoga just 3 years prior as he was squatting down for something and couldn’t easily get back up. ‘Well that’s not going to work for me’, he had muttered to himself and at 76yo his yoga journey had begun.

For many, the retreat was about meeting other like-minded people as well as enjoying the tranquil setting and of course delicious mouthwatering chef-prepared meals. And whilst I loved all of that, for me, it was so much more.

The practice of Yoga teaches us to let go

To let go of thoughts that don’t serve us, our daily busyness, activities, and distractions. To let go of the past and what ‘might’ or ‘could have’ been. It is about letting go of negative emotions or bad feelings, judgments, and self-deprecation, and simply focus on the breath and the present.

I have been a yoga student on and off for about 8 years now and the benefits have been priceless. This was my fourth retreat, and it was this magnificent question that had returned me to the moment of ‘Why’.

Yoga allows us to feel peace, joy, happiness and calm

At the end of my first yoga class many years before, I had tears running down my cheeks. I had no idea why but I knew immediately this was not just another exercise class. From that first day of my yoga journey, I learned the power of the breath. I experienced personally how it is a natural medicine we carry around that helps reduce anxiety, fear, insomnia, aggravation, stress and so many other undesirable emotions.

Yoga provides space for us to feel focussed, balanced, and grounded

I had come to learn that most if not all unwanted emotions could be managed by concentrating on my breathing.

The benefits of Yoga are not always obvious

I went to yoga to take time out for myself, to focus on my health, and to recharge and reboot. I knew the flow-on effects included me being a nicer and more compassionate person and a better wife.

When Ben was here, I was a better mother, and I now carried these benefits into my relationships with his friends and other adults.

By quietening the world inside my head, I left room for fresh thoughts, new ideas, plans, future goals and dreams, and a high-rise of windows of opportunities. I knew when I left I would be more inclined to try new things without feeling the need to know it all or be perfect.

I had many opportunities to try new poses. Whilst you are always urged to work within your own limits, whatever those are, you are also encouraged to push yourself to the edge.

Holding poses and achieving things I hadn’t done before reminded me I am stronger than I think.

Who else did I know in their 40’s, 50’s or 70’s who would have dared to do handstands or headstands that weekend?

There was an overwhelming sense of achievement and exhilaration knowing I had pushed through another fear barrier, something I had only felt at Vision Quest.

Over the five days, I had attended two 90-minute classes a day, one at 7 am which awakened my body and my spirit. The other at 4.30 allowed me to reflect while stretching and indulging in more of a restorative practice.

The hours in between were my own and I never felt guilty for wandering off for a walk, swinging in a hammock, reading a book, or just staring into the trees. This was my time and I felt amazing.

I knew I would be able to take all of what I had learned back and incorporate it into my ‘other’ world. I would take home all the benefits and my sense of confidence, energy, aliveness, empowerment, strength, inspiration, and fearlessness.

I would also take the sense of balance, calm, peace, stillness, compassion, self-aware, and feeling of being grounded.

My mind, body, and spirit had all been cared for and nourished and I knew I would be sustained until the next retreat … or at least until I could get back on the mat the following week.

Now how was I going to put all this into a line or two? It was impossible!